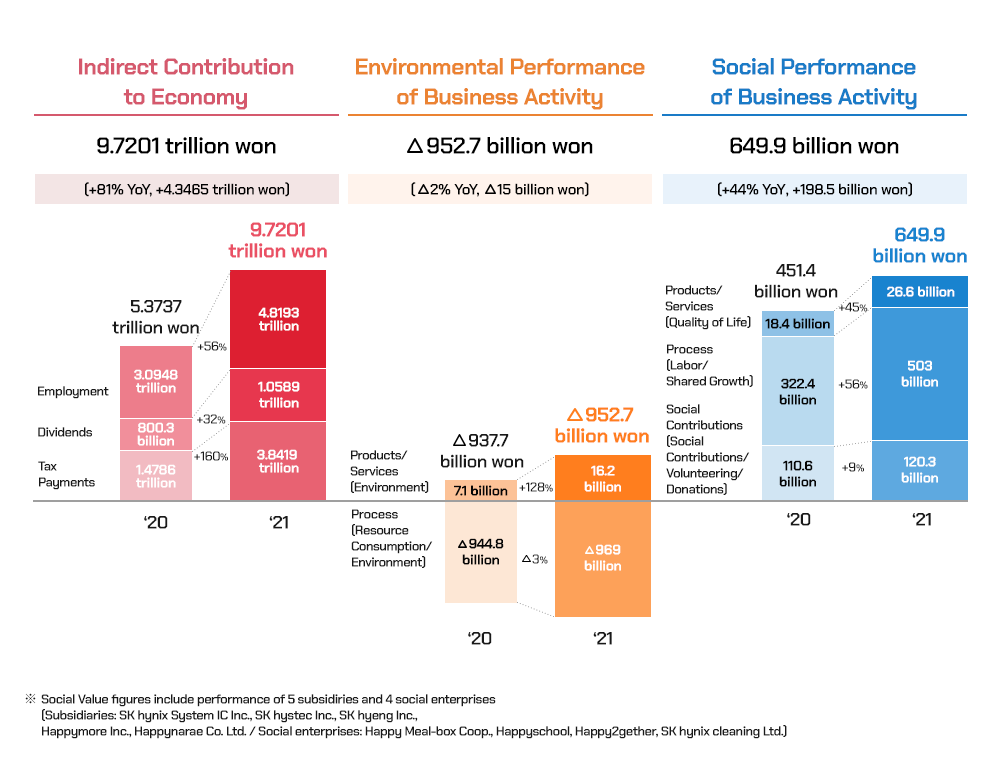 In particular, indirect contribution to economy increased by 81%, or 4.3465 trillion won, from a year ago, helped by the company’s all-time high revenues in 2021. Social performance of business activity also rose by 44%, or 198.5 billion won, on the back of efforts to vitalize the semiconductor ecosystem and expanded philanthropic contributions for the underprivileged. But with increased greenhouse gas emissions as a result of more production to meet stronger demand for semiconductor globally, the negative impact grew by 2%, or 15 billion won, in the area of the environmental performance of business activity.

Indirect contribution to economy increased across all categories of tax payments, employment, and dividends. Tax payments soared 160%, or 2.3633 trillion won, on year as the company reported stronger financial results. A rise in the number of employees and bigger compensation package also led to an increase of 56%, or 1.7245 trillion won, in the employment category. Dividends rose by 32%, or 258.6 billion won, as the company implemented a more aggressive shareholder return policy.

In the area of environment, the company reported a negative reading for a second straight year as more resources were consumed to produce more semiconductors, also resulting in a gain in greenhouse gas emission. More precisely, negative cost increased by 3%, or 24.2 billion won, from a year ago, in the area of resource consumption/environmental pollution. Such negative result was somewhat offset by an increase of 128%, or 9.1 billion won, in the product/services segment with development of low-power products.

“SK hynix has been making efforts in various aspects, joining the Green Premium System, trying to reduce greenhouse gas emissions and expanding reuse of wastewater in order to lessen the environmental impact,” the company said. “But whatever the reasons are, we are still responsible for the impact we had on the environment. We will continue to aim for an improvement in the environment area and make endless efforts.”

*Green Premium System: A pricing system whereby a consumer of electricity pays an additional premium on existing electricity costs in order to use power from renewable energy sources

In the category of the social performance of business activity, shared growth showed the most remarkable improvement. SK hynix has for years continued its efforts to vitalize the semiconductor ecosystem by consistently providing technological support and training opportunities to its business partners. SK hynix has also contributed to localization of materials, parts, and equipment through joint technological development with its partners. As a result, shared growth performance rose by 56%, or 180.6 billion won, from a year ago.

Elsewhere, the company saw a growth of 9%, or 9.7 billion won, in the social contribution area as it continued relevant activities in a socially distanced manner during the pandemic. The performance for “life-quality improvement for the underprivileged” increased by 45%, or 8.2 billion won, thanks to its continued support for social enterprises.

Kim Youn-wook, Vice President for Corporate Sustainability Management, said that SK hynix has been communicating with relevant stakeholders transparently, making public its social value performance for the past 4 years since 2019. “We will speed up implementation of the SV2030, our mid- to long-term initiative for social-value generation, and advance our ESG management commitment further with an aim to contribute to the mankind and the community.”

*Specific examples of social value generation and detailed calculation methods can be found from the SK hynix newsroom.