Using molecular oxygen to perform oxidation reactions is the most atom-efficient concept in organic synthesis of chemicals no matter whether they are used in the chemical, agro or pharma industry. The direct use of O2 has, however, been restricted by safety concerns and selectivity issues in conventional organic chemistry. In recent years, developments in the fields of biocatalysis and biotechnology have delivered a number of new and improved enzymes catalyzing oxidation reactions that can be applied in a variety of oxidation reaction types [1]. In a collaborative effort within the framework of a EU Horizon 2020 project (https://h2020robox.eu), Innosyn has teamed up with leading academic and industrial partners and demonstrated that selective enzymatic oxidation reactions with O2 can be performed in an efficient and safe way on 200-litrescale in the company’s pilot plant.

Enzymes are especially useful when chemo-, regio- and/or enantioselectivity is required in the synthesis of a target product. This also holds true for oxidation reactions in which molecular oxygen is used as the terminal oxidant (producing H2O as the only by-product) or alternatively, one or two oxygen atoms are inserted into specific positions of the target molecule (mono- or dioxygenases). To demonstrate the general applicability of such molecular oxygen driven biocatalytic oxidations the authors selected four different oxidative enzyme classes and a diverse set of target substrate/product combinations for different end markets.

Next to the availability of a variety of active and stable oxidative enzymes, the safe use of molecular oxygen in the presence of high concentrations of the substrates and products as well as organic solvents has always been a safety concern. While biocatalytic reactions typically occur in an aqueous reaction medium, many of the target molecules have only limited solubility in water. In industrially relevant concentrations of ≥5 wt.%, these compounds frequently form a second phase (as pure compound or in an hydrophobic organic solvent) or have to be kept in the aqueous solution through the use of water-miscible co-solvents. Hence,a considerable fraction of the reaction volume consists of a potentially combustible mixture of organic compounds with the oxygen that is sparged into the reaction, either as air or as pure oxygen from gas bottles. Therefore the authors addressed this obvious dilemma of high substrate and product concentrations at high enzyme reaction rates and oxygen supply rates in dedicated, thorough HAZOP and safety studies for each of the biocatalyst/product combinations that were scaled up in the pilot plant.

Two different types of monooxygenases (MOs) – cytochrome P450-MOs and Baeyer-Villiger-MOs (BVMOs) – were chosen for these studie since they are capable of selectively introducing an oxygen atom into a (non-activated) C-H bond and a C-C bond next to a carbonyl, respectively (Figure 1, top 2 reaction schemes). In both cases, the second oxygen atom is concomitantly reduced to H2O with electrons and protons from nicotinamide co-substrates. The recycling of the costly nicotinamides is an important aspect, which has been solved using cheap sacrificial co-substrates such as glucose and a corresponding glucose dehydrogenase helper enzyme. Alcohol dehydrogenase (ADH) and alcohol oxidase (AOX) enzymes, which can both oxidize primary and secondary alcohol functionalities in organic molecules, completed the set of biooxidation enzymes that were scaled up(Figure 1, bottom two reaction schemes). All four enzyme classes use molecular oxygen as the terminal oxidant, either directly like P450, BVMO and AOX or indirectly like ADH for which an NAD(P)H Oxidase (NOX) that uses O2to recyclethe reduced nicotinamide cofactor to the oxidized form that is needed for the ADH oxidation reaction was used, producing water as the only by-product. AOX produces hydrogen peroxide as by-product which can be quenched to water and oxygen by a catalase enzyme or by chemical means. 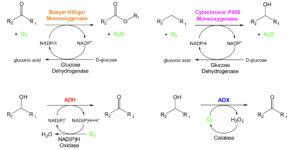 To demonstrate the broad applicability of biooxidation reactions at scale the authors further chose target compounds from various chemical industry segments: in addition to high-value pharmaceutical intermediates or metabolites, monomers for speciality polymers, vitamin intermediates and flavour & fragrance compounds were investigated. Figure 2 shows a selection of four of the seven pilot plant demonstrations that were carried out at relevant enzyme/product combinations and the key process metrics that were gathered to evaluate their efficiency.

It was very satisfying that for all four enzyme classes, the scale-ups were feasible and yielded targeted kg amounts of the desired products. Even for the delicate cytochrome P450 enzymes, which are known to be less stable and efficient biocatalysts than most other enzyme classes [2], good product concentrations and amounts could be produced at acceptable isolated yields and volumetric productivities (space-time yields). For the other three enzymes classes, BVMO, AOX and ADH, high space-time yields of 4.0 to 6.3 gram per litre per hour and product concentrations of 38-47 g/l were achieved (Figure 2); a concentration range that is regarded as enabling efficient product isolation from the biocatalytic reaction mixture. Consequently, good to high isolated yields of 82-95% after solvent extraction could be obtained for these latter three pilot plant runs.

The high productivities only became possible once the air supply was changed to pure oxygen from gas cylinders. Otherwise the reactions would have been run in oxygen-limited fashion and foaming of the proteins out of the reactor could have occurred, such as was experienced ina down-scaled 1 L version of the pilot plant reactor. When the reaction was switched to using pure oxygen, it was possible to achieve a full oxygen mass balance of the reaction by implementing flow controllers and oxygen sensors for the measurement of the O2 dissolved in the reaction mixture as well as in the reactor head-space. As a result, the reactions were steered based on oxygen consumption and supply.

In the HAZOP and safety studies, which were executed based on the characterization of each reaction combined with the physico-chemical properties of all reaction components (including substrate, product, co-substrates, by-products and solvents), it was concluded that in none of the reactions would combustible mixtures develop if the O2concentration in the head-space of the reactor was kept below 8 vol.%. Therefore, the reactions were steered so that the applied enzyme activities and the oxygen supply were in balance and all or most of the O2 was consumed in the biocatalytic oxidations. In case the oxygen consumption was going down in the course of the reaction (e.g. because of enzyme inhibition or inactivation) and dissolved and head-space O2 concentrations increased, the oxygen supply ratewas reduced. As an additional important safety measure for the case that the enzyme reaction would not take off or stop in the course of the reaction, a constant N2 sweep over the reactor volume surface was employed.

The effects of scale-up

Scale-up from the 1 L lab reactor to the 200 L pilot plant reactor is shown in Figure 3 for the regio- and chemoselective oxidation of a hydroxy-lactol. The substrate and product of this reaction are intermediates in an alternative route to δ-lactones which are used in the flavours & fragrances industry and currently typically isolated from tropical plants and trees or chemically synthesized as racemates. Alternatively these molecules can build up enantioselectively from natural aldehydes coupled by aldolase technology, but need to be oxidized selectively at the lactol group and not at the secondary alcohol functionality (Figure 3). ADH-A from the project partner c-LEcta was found to be very efficient and completely selective in this oxidation and combined with NAD(P)H oxidase NOX-01 from Innosyn’s fermentative production [3].The NOX enzyme was needed to re-oxidize the NADPH formed in the ADH oxidation of the target lactol back to NADP+ as stoichiometric amounts of these nicotinamide co-factors are too costly. While ADH-A proved to be a very robust biocatalyst, NOX was inactivated by the lactol substrate at concentrations of 35 g/l. This is around its solubility limit and where it started to form a second phase. Application of water-miscible co-solvents to increase the lactol solubility in the aqueous reaction mixture did not improve the efficiency of the overall reaction. However, some polar but not water-miscible organic solventsapplied in ratios of 2:1 to 1:2 resulted in high reaction rates and almost quantitative product formation at 50 g/l substrate concentrations. The best results were obtained using2-ethyl-1-hexanol containing the lactol substrate in a ratio of 1:1 to the aqueous phase containing the enzymes and the co-factor.

In the 1 L biooxidation reactor, quantitative lactol conversion was achieved within four hours accompanied with almost quantitative lactone product yield (Figure 3). The product yield based on the O2 consumption calculated from the oxygen measurements at the different control points almost perfectly matched the yields based on GC analysis of the reactants. Only towards completion some deviation was observed. In the linear scale-up of these conditions to the pilot plant reaction at 75 L volume, a somewhat slower substrate conversion and product formation was observed combined with s lower or delayed oxygen consumption. The latter might be influenced by the position of the electrode that measured the dissolved oxygen. Nevertheless, the pilot plant demonstration also reached ≥ 95% lactol conversion and lactone yield based on GC analysis within eight hours, producing 4.6 kg lactol product at a concentration of 47 g/l (over both phases) with a high volumetric productivity of more than 6 gram per liter per hour. 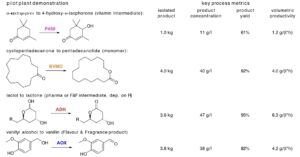 Debunking the myth: molecular oxygen is safe to use!

In view of the high success rate of scaled up biocatalytic oxidation reactions using P450, BVMO, AOX and ADH enzymes in the pilot plant, the authors are convinced that more examples of these reactions will be seen as well as other types of biooxidations using pure molecular oxygen as oxidant on pilot plant and full scale in the near future. In addition, these pilot plant campaigns are also a contribution to dispel the myth that the use of pure oxygen in the production of organic molecules is not safe. More important than avoiding pure oxygen per se is the careful, in-depth characterization of the specific reaction system in suitable and scalable laboratory equipment to define the window of safe operation as well as efficientcontrol measures.