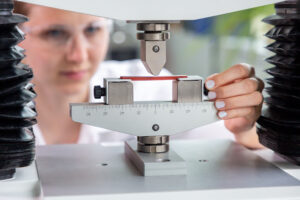 The industry is increasingly facing the challenging task of manufacturing mechanically durable plastic components that can withstand temperatures of over 200 degrees Celsius for long periods. WACKER has developed a novel material solution to this problem which will be presented at the K 2022 International Trade Fair for Plastics and Rubber for the first time. Thanks to the silicone resin binders SILRES® LR 700 and POWERSIL® Resin 700 and the binder-based silicone molding material POWERSIL® Resin 710, manufacturers can create molded parts via compression molding, pressure gelation or even injection molding technologies. This makes the product suitable for molded parts, which comply to insulation class R and have to withstand temperatures of up to 220°C for extended periods of time.

The new silicone resin binders, which are not subject to labeling requirements under EU directives, offer several advantages and are therefore an alternative to high-temperature-resistant polymers like PTFE (polytetrafluoroethylene) and PEEK (polyether ether ketone).

Components produced using these new products are hallmarked by good mechanical strength and UV stability. The silicone materials involved can be processed with roughly the same ease as com-pounds like epoxide-based or polyurethane-based resins, which are very commonly used for producing components subject to lower levels of thermal stress. SILRES® LR 700 and POWERSIL® Resin 700, both solvent-free phenyl methyl silicone resin binders, are transparent, low-viscosity liquids. Both binders require suitable combinations of fillers when processed into molded parts with good mechanical properties.

WACKER has therefore developed an optimized formulation called POWERSIL® Resin 710. This means that the company has two alternatives on the market for manufacturing molded parts that are stable at high temperatures: customers who prefer to work with their own fillers and/or filler blends, can use SILRES® LR 700 and POWERSIL® Resin 700 liquid binders; the best pick for users who want to take advantage of ready-to-use solutions, is POWERSIL® Resin 710.

The formulation comprises the silicone resin binder and a filler blend consisting of powdered and fibrous fillers. WACKER’s innovations are a response to increasing industry demand for polymers that resist high temperatures. Because techni-cal systems are becoming increasingly more powerful and, at the same time, smaller, they emit more heat per unit area. In electric vehicle motors, for example, losses of five Watts per cubic centi-meter are not unusual. Electrically insulating polymer-based components positioned near these kinds of heat sources need to work flaw-lessly for years and retain their properties in the face of the high temperatures generated.