The science behind making a perfect pancake

By Simon Cotton, Senior Lecturer in Chemistry, University of Birmingham 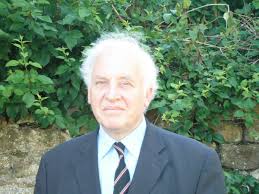 Everyone loves pancakes and wants to know the secret of cooking them. And that partly depends on whether you’re after the thin, crêpe-like European style or the thicker ones more popular in North America as each requires a different approach.

When you make pancake batter you are mixing a whole range of different chemicals (so all sorts of reactions take place in the cooking). The dry ingredients contain flour and sugar, as well as salt and maybe either baking powder or baking soda. Flour supplies protein, molecules made of lots of amino-acids joined in chains, along with starch, which similarly is made of lots of simple sugar molecules joined in chains.

Much of the protein in flour is gluten. When you mix the flour with eggs and milk, the gluten molecules get more flexible and can bind to each other forming networks. The mixing causes carbon dioxide gas from the air to be trapped by these networks, which causes the pancake to rise (just like bread does) and creates its chewable texture. Eggs give you more protein, while sugar and butter give tenderness to the texture and the fluids help the mixing process and enable chemical reactions to occur. 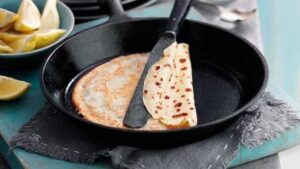 Thicker pancakes need a raising agent which produces carbon dioxide by itself when heated. This is typically sodium bicarbonate (baking soda) or baking powder, a mixture of sodium bicarbonate with a weak acid like cream of tartar. You might remember from chemistry lessons at school that when you mix an acid with a carbonate, you get a fizzing. This is the carbon dioxide gas.

Professor Peter Barham of the University of Bristol is one of the great experts on the science of cooking and he has some good advice about getting things right when making pancakes:

For a start, cooks always use too much batter’ and that the pan should be hot, but not too hot ‘almost smoking – but not blue smoke’ and should just have a smear of butter or fat.

He goes on to say that a “standing” period of between one and three hours before cooking is vital.

It is important to beat the mixture hard, so that gluten forms, for the mixture to then stand to allow the starch to swell and any air bubbles to pop. Unless you do this, the structure of the pancake will be weak and it will be full of holes.

Nigel Slater says that you don’t have to let the batter stand, but half an hour is probably best. It’s also important to remember that if you add buttermilk, which is slightly acidic, it will also react with the carbonates, and leave the batter too long, all the gas bubbles will have escaped, and your pancakes will be flat.

Most chefs do not suggest a particular cooking temperature (moderate heat seems the norm). The pan should be hot enough for the pancake to brown in less than a minute, but not so hot that the batter “sets” when you put it on the pan, before it has time to spread. But all seem to agree on the importance of getting the right pan -– a nice heavy, flat one, which will hold the heat well.

The aroma and colour of pancakes originate in the same chemical reaction, known as the Maillard reaction, after its French discoverer, Louis-Camille Maillard. It is caused by hot sugars reacting with amino-acids, generating a wide range of small molecules that escape from the mixture and carry their smells (such as nuts, bread or coffee) to your nose. Some of these brown compounds, also found in bread and coffee, are called melanoidins.

If you are just a bit mathematically inclined, you will appreciate how university researchers have shown you can even use formulae for making pancakes – whether to work out how much batter you need or how to get the perfect flip. At a more complicated level, these formulae bring in factors such as the cooking time and the temperature of the pan to get as near perfection as you can. But ultimately, for all the formulae, advice from chefs and scientific tips, there’s only one thing for it – start mixing that batter.